Local events are usually low key and in the 'localised' area, ideal for newcomers to try the sport and Activities are non competitive events used for training and coaching, aimed at members of the club, but they can attract people from neighbouring clubs, and are often ideal for newcomers to try the sport. Regional events attract participants from around the local Region, National events are high quality competitions that will attract people from far away, Major events are Major Events such as a British Championships.

Thank-you for all the favourable comments given to our Club Members yesterday.

As I have said on many occasions I am blessed with so many wonderful friends who support the STAG programme so my thanks to Alastair, Ali, Alison, Blair, Ceana, Chris, Colin, Dan, Gerry, Helen, Hua, John, Kenny, Kyle, Lorna, Lynn, Lyznik, Robin, Rosalind, Ross, Rudi, Sheila, Thomas & Velina.

From an organising point of view when you have a superb volunteer workforce the day is straightforward and even better when the sun shines!

As is the norm our STAG provisional accounts are currently available & once we are informed by Forestry Land Scotland of the fee being charged shall be finalised.

This remains the most enjoyable part of the job but now being 61 yrs + (I know I don't look it ;) ) and not being as physically fit & active as I would hope, it did at times turn into a real chore. If it wasn't for the support from Blair helping set out the controls, the offer from Ali McLeod to assist Colin & myself to wake up controls - Ali run early on the Brown Course with 31 controls leaving a mere 17 controls for us to awaken and the STAG Team of Blair, Dan, Helen, Alastair, Hua, Kyle, Alison, Ross, Lyznik & Rudi bringing in the little darlings I would not have had the drive & motivation to take on this role as well.

If I wasn't retired I wouldn't have been able to put out controls on the Friday ; it would have been an impossibility to get all the controls out on Saturday. Our sport cannot sustain its reliance on the retired volunteer workforce and although double weekends are attractive the pressure being piled on already over worked volunteers needs to be realised.

Future planners need to come from the younger generations who are more likely to be holding down a Monday > Friday job so having the Saturday to set up the event is a prerequisite in my opinion to enhance the delivery of a quality experience.

The competitors who personally thanked me (much appreciated) recognised the technicality of the area but also the physical unquestionable demands but all enjoyed the challenge.

Sad though it is, my thoughts have now turned to our next use of Errochty and looking at the possibilities of using the Western side only where the running is far cleaner and thanks to the capercaillie presence (red hatched area OOBs at this time of year) might still be there in 10 years time. This was used way back in 2002 for Junior Home internationals. The difficulty still remains how to cater for inexperienced Juniors if this area is used.

And although Graham Gristwood's run on Brown was impressive my STAR of the day was young James Hammond (FVO) who blasted round the Orange in under 20 minutes and highlighted his true potential and sister Rebecca also deserves a mention for her performance also on Orange.

We have a wonderful sport which for me we can further safeguard for future generations by setting the whole of Scottish Orienteering on a more sound financial footing by stepping back and making a more realistic assessment of our Membership & Event Costs. A time for brave decisions to set us up to benefit from our WOC 2022 efforts.

Volunteer input remains priceless and at the very foundation of our sport but this aspect needs to be both more respected and more valued.

I sense that many, including myself, have for too long had a kind of 'missionary zeal' to promote our sport at minimal costs and indirectly have under valued our product thus creating difficulties in the sense that if its cheap as chips well it cant be worth that much.

I have no doubts that our sport will benefit if we are more open with costs involved and set realistic fees. and let orienteers see where their entry fees go.

STAG has identified other forests within this part of Highland Perthshire and is also liaising with TAYSIDE ORIENTEERS on possible joint projects but mapping such terrain is incredibly expensive and events are really orienteers only true source of income except grant aid.

Controller's Comments - Colin Matheson (Moravian)
Well done to St Andrew's Orienteering Club Glasgow (STAG) for staging such a successful event. Terry O'Brien BEM put in a huge amount of effort as both Organiser and Planner and took on board the additional advice I was able to offer as Controller.

Errochty is a fantastic area and despite having had a large clear felled area in the centre offered technical orienteering of a high standard in what was physically quite challenging terrain. I was most impressed with Graham Gristwood's sub 53 minute run over a 8.6 km course with 325 metre climb and 31 controls! Others on the same course certainly had value for money in the time spent out in the forest. There were no comments that courses were too short and thank you for the many positive comments received during the day.

One main start and two finishes allowed us to take the longer courses out in one direction and then back again - the area was just wide enough to prevent running back over the same terrain. Today's conditions were actually the "easiest" I had known in the forest - all previous visits were hampered by snow on top of the bogs and fallen branches.

The event did go ahead despite concerns about Corona virus - precautions were taken to minimise crowd gatherings including letting runners start as soon as they reached the start lanes (but not advising them of this decision at the car park to prevent collusion) and doing away with results display. Foaming hand wash was in Scotloos and many competitors had their own wipes/gel.

A good 4G signal meant that results were available online during the event in any case and thanks go to Robin Strain for such an excellent service including instant CompassSport Cup & Trophy results.

Read more about the mapped area 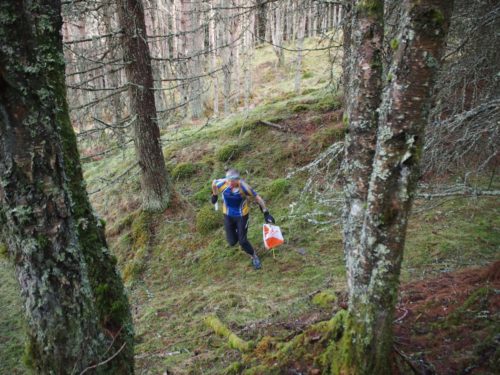 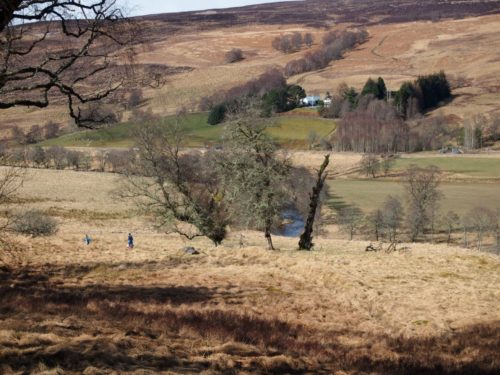 Out into the open 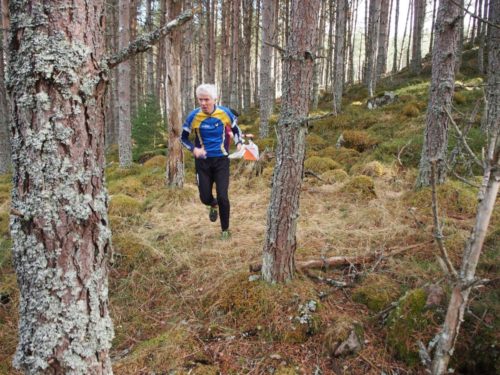 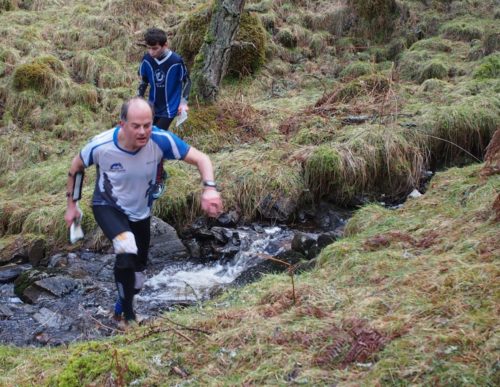 Max Carcas of Interlopers focussed on the task ahead 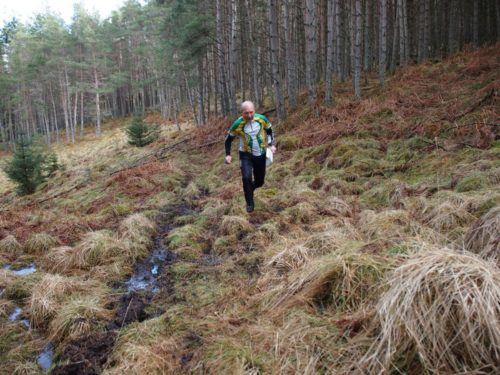 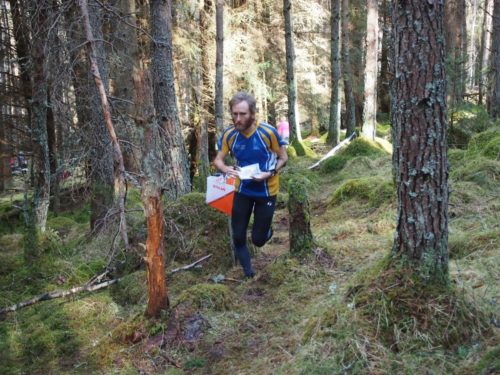 Graham Gristwood out to smash the time for the Brown Course 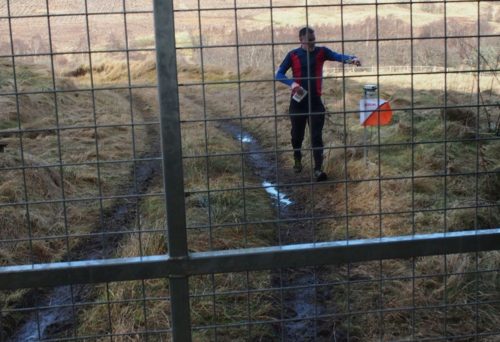 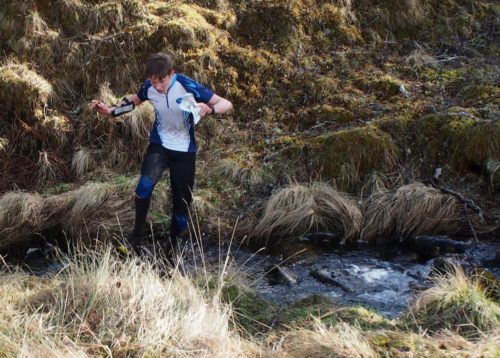 Daniel Campbell of Moravian focussed on winning the Short Brown 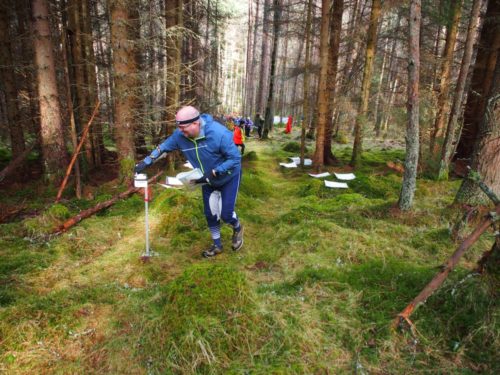 Andy Paterson of CLYDE setting out on his big adventure

Safety and Risk: A comprehensive risk assessment will have been carried out by the organiser, but participants take part at their own risk and are responsible for their own safety during the event.

Privacy: when participating in our events/activities your name may appear in the results section of this website or in newspaper reports. Read our Privacy Policy to see how we look after your personal data.