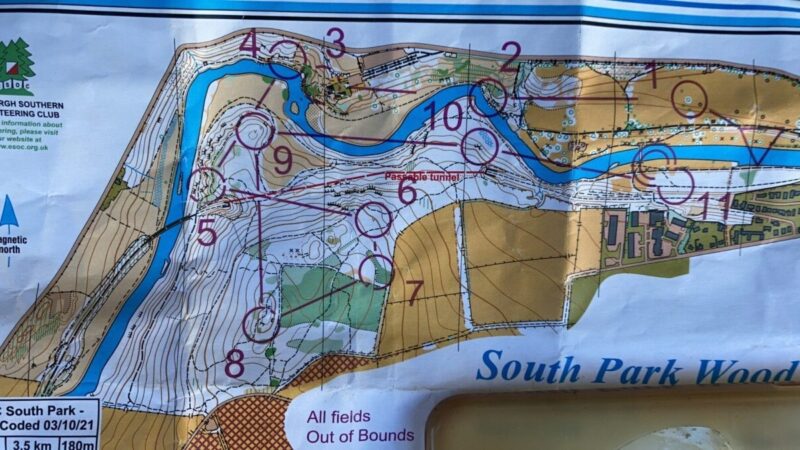 Seeing that our friends in ESOC were having a local event in Peebles I decided it was time for a return to Orienteering.

Knowing my SIAC finger's battery was weak I started off with 2 SIs but things seemed ok at the battery check so it was non-contact punching for me.

Everything was going well and I caught Pauline at Control 5 and then set off for Control 6. Now bear with me because this can become very confusing.

Take a look at the image of the GREEN course before reading on.

So I set off on the leg from 5 to 6 - round the wee path then the tough slope to reach the path to the NW of Control 6. Not being sure exactly where I came out on the path, I decided to head down to the 'Y - junction' to give me a definite Attack Point and this appears where my run went pear-shaped!

Being nice open forest to the east I decided to 'dive in' before reaching the junction but for reasons not realised at the time - oxygen debt? - I was now looking at Control 9 on the map instead of Control 6. Both had the same description. Both had a path on the western side.

So still looking at Control 9 on my map, I just could not understand why I wasn't seeing a wee hill in the forest. Becoming annoyed and frustrated I headed for the edge of the wood and convinced myself that the mapper hadn't mapped the tree band in the field :))) Wrong again as I was looking at the wrong field!

Still not realising what I was doing, I headed downhill and then walked back up the western path. Checked the contour interval on the map hoping that the reason I couldn't see the hill was that the interval was 2.5m not 5m - wrong again.

And then surprise, surprise I spotted the little darling to my left.

So now thinking that I was at Control 9 on the ground (when actually was at Control 6) I saw the path run to Control 10 (should have been going to Control 7) and bombed down it only to arrive at the east end of the disused tunnel.

My wee brain just wasn't on the ball and I happily relocated and headed to Control 10 and it was only on leaving this control that the penny finally dropped and I paused and realised that I had not visited Controls 7, 8 or 9 . Time for a good chuckle but no drive to retrace my steps to Control 6 so nice wee run to Control 11 then the Finish.

Saving grace 1 fastest slip and in the lead at Controls 2 and 4 :).

This problem is not new in getting Controls '6' and '9' mixed up when they are close together. Ultimately the error is mine but shall take a look at fonts and see if such can be avoided for all future STAG Events and Activities.

Postcript - in Condes it might be possible to add a wee red line under 'The 9' to distinguish it from '6'.