Having remembered that I had already checked Pollok CP (20/20) and Bellahouston (15/16) in early December - 100% and ran at Glasgow Green and Kelvingrove(Historical PCs) all that remained were visits to Queen's Park & Cathkin Braes CP.

Wee visit to Linn Park to salvage Post 5 as explained below.

Alexandra Park (10/10) Recovered Post 6 from where I had stashed it and now relocated on fence near original site. Posts 5 & 6 were snapped over the past few months and have been secured to fences. Map has no major changes. Our understanding is that Alexandra Park Golf Course, like Linn Park GC is currently closed.

Springburn Park (9/10) Post 7 that was 'lost' has re-emerged from the summer undergrowth. Post 6 found snapped has been relocacted to the north side of original bush secured to a stanchion on the boundary fence. Some amazing growth in recently planted rhododendrons!!

Hogganfield Loch Park (9/10) Sadly the most recent new post to be installed Post 6 has been snapped by vandals. I have relocated this within the woodland to the north of the original site. Post 10 @ old entrance to Pitch and Putt Course has been secured to fence. Post 9 is within P & P.

Wednesday 30th December Although part of DCP is within GCC, the majority lies in NLC. This rivals Tollcross Park as being the earliest PC set up in the early 1980s. Some of the original Stone Posts (kerb edgings) are still present and visible after almost 40 years :)))

The current wooden posts were installed at DCP around 2005 and were repainted by Andy and myself in July 2020. 18/18.

Tollcross Park (12/12) - All 12 posts fine. New development of Hot House underway - Nursery to be built. Some 'topping' of bushes but little change otherwise.

King's Park (10/10) - Scottish Water's work has finished but there is still an area of land fenced off with Heras Fencing. All 10 posts located but map needs tweaked.

Kelvingrove Park - Bridge over River Kelvin west of Art Galleries closed off. Not any obvious changes needed to map. PC is historical so no posts to check:)

Dawsholm Park (10/10)- All 10 posts fine. High wall at entrance at Dalsholm Rd removed. Appears to be ongoing work around 'pond' with new track, stairs cleared and new ones reinstated at far end of Dalsholm Rd. Areas of undergrowth have not died back even in this very cold weather. Spottted 4 new silver seats but there could be more on main track. Some windblow in centre of park blocking a track. 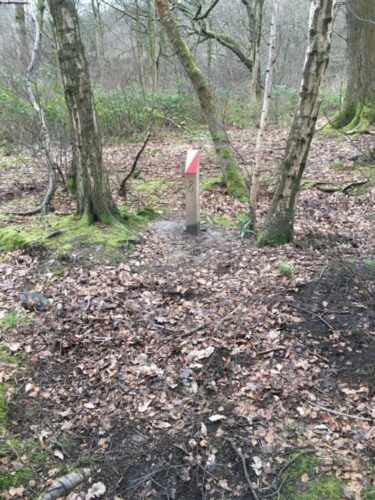