Local events are usually low key and in the 'localised' area, ideal for newcomers to try the sport and Activities are non competitive events used for training and coaching, aimed at members of the club, but they can attract people from neighbouring clubs, and are often ideal for newcomers to try the sport. Regional events attract participants from around the local Region, National events are high quality competitions that will attract people from far away, Major events are Major Events such as a British Championships.

If you went down to the Braes last night it was a very busy place as our photograph proves!

Local residents, with friends from desirable Dennistoun & luxious Lanarkshire turned up on another beautiful evening to help STAG bring WOW 2019 to a glorious end.

The Orienteering as ever proved a real test with the crème de la crème (Joe & Fredrik) rising to the top again.

The map - there is no doubt that parts of the map need to be updated but until Glasgow City's plans for further extending the Mountain Bike network are confirmed this is just not an option. In conversation with Simon we discussed 'another clearing' near Control 4 / Code 33 and, as you can see from the 1992 Map attached it does indeed exist whereas on the 2015 map the clearing to the south of the rhodo bush does but the 1992 doesn't show that.

Cathkin Braes is always useful as it provides STAG's most challenging physical & mental test which also highlights the need for STAG to arrange such training for our Members so expect this to be on our agenda in the Autumn.

To assist I had enlarged the map scale but then left 'map legends' in the house but I am now told by coach Gerry that the symbol for a tunnel is now known!!

Thanks to Colin, John & Marta for composing our photograph & to Fredrik & Gerry for their help & a special thanks to Nick Langley for giving the inspiration for the photograph via the curse of predictive text ie Braes / Bears !!

At Car Park at Western end of Back Road to Carmunnock

Read more about the mapped area

As Tollcross use made of Permanent Course.

OK so its the day after WOW supposedly ends but then again they were initially only going for a 1 Day idea so we shall keep it going for another day.

Other Events part of the Spring Series 2019 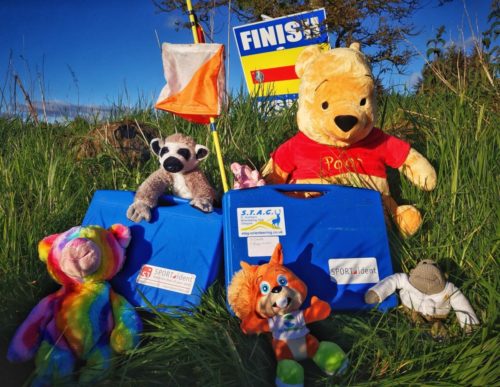 A series of evening events all with the same format & open to all.
Pre-registering is NOT a necessity but it does help us with a guestimate of how many maps we need to have printed.

Everyone is welcome to Come And Try Orienteering at our events. Friendly advice & assistance is always available.

Read more about this series

Safety and Risk: A comprehensive risk assessment will have been carried out by the organiser, but participants take part at their own risk and are responsible for their own safety during the event.

Privacy: when participating in our events/activities your name may appear in the results section of this website or in newspaper reports. Read our Privacy Policy to see how we look after your personal data.